A new television series aired this week.  Adding to the plethora of shows about saving and fixing restaurants and bars,  ‘Church Rescue’ features three church consultants who help local congregations improve their mission, build their flock, resurrect their mission and market, and find ways to improve their offering.

Congregations and faith-based organizations are facing a storm of issues, not the least of which are the new economic realities of this 21st century.  These changes feel scary and there’ll be a greater deal of turbulence to come, but the reality is pretty simple: the old, established world and worldview and, add to that, economy – an economy in many ways created with no small amount of blood, sweat and tears by visionaries like Henry Ford; the economy which led to the birth of an American middle class – is coming to an end.[1]The world as we know it has shifted.  And we are shifting with it.  But we’re not alone.  Take the Millenials, for instance, the generation of young adults who were born in the late 1980s and 90s.  This first generation to come of age in the new millennium – hence their name – will also be the first generation in modern times to make less money than their parents.  They’re not lazy or narcissistic, and it’s not that they’re ineffectual, having been coddled by their so-called ‘helicopter parents.’  It’s that what the institutional Christian church is dealing with now, as a first-world, not-for-profit, somewhat secularized institution, the members of this generation been dealing with their entire adult life.  Ever since the early 1970s, since just before they were born, there’s been an increasing and encroaching wealth gap in America along with a fundamental stagnation, if not regression in the economy.  Around that time, the mainline institutional church had already measured its high-water mark, being aware because their numbers were sliding downward.

Here’s a thought: why don’t we, the church, learn from the members of the first generation that is, already, living into that new world, a situation, for them, that isn’t better or worse or changed but is pretty much reality?

The Millenials know, firsthand, what economic stagnation and regression feels like.  On the whole, they’re incredibly well-educated; after all, their parents told them that college and graduate degrees were key to success.  But “the price of attending a public four-year college rose 54% from 1998 to 2008 while the typical American household earned less in 2008 than it did a decade earlier, adjusted for inflation [sources: College Board, Leonhardt]. Therefore, to pay for the education touted by parents, teachers and the government as critical to future success, millennials took on massive debt, a record-breaking $35,200 on average for each 2013 U.S. college graduate.”[2]  These young adults have also been hit hardest by the nation’s worse economic collapse since the Great Depression.  Because those Baby Boomers who were thinking about retiring sometime in the first decade of the new millennium held on to their positions, being suddenly faced with diminishing nest-eggs, the debt-laden Millienials, who thought they could get a good job to pay off their student loans,  found themselves facing huge unemployment or under-employment.

What the American economy has realized – the 2010 census revealed that overall household income, across the board, has stagnated  – Millenials have been dealing with their entire adult lives and most middle-class Americans have faced for at least a generation.  According to The Economist, “Current incomes are at roughly the level of the late 1970s. [But] the cost of everything from housing to education has risen steadily in recent decades. From a real income perspective [for] the median household, the picture is one of a generation of stagnation.”[3]  “From 2000 to 2010, when many millennials entered the workforce, median household incomes fell for the first time since World War II,” Dave Roos adds, continuing: “It’s hard to make more money than your parents when jobs are paying less for the same work.  The wealth gap between older and younger people has also widened significantly over the past 30 years. A 30-year-old in 2013 is worth 21 percent less than a 30-year-old in 1983. Meanwhile, the net worth of the average 60-year-old today is more than twice as high as 1983. In other words, young people keep getting poorer, while old folks get richer.”[4]

But there’s hope and I’d say it’s real, Christian hope.  When polled, the Millenials report astonishingly high degrees of happiness, contentment and optimism.  According to the Pew Research Center, “a whopping 88% of people ages 18 to 34 said they had enough money or would have enough in the future to meet their long-term financial goals. …Even among those who said they were unemployed and financially strapped, 75% said they would someday have enough money. Overall, nearly three out of four believed they would achieve their goals in life — or already had — which was slightly more than among older adults,” the Los Angeles Times reported, quoting Kim Parker, associate director of the Pew project: “It’s hard to imagine a time when there was this level of optimism among a group so hard hit by economic conditions,” Parker said.[5]  To find out why their optimism is so high, look at the way the Pew survey question was worded, Roos cautioned: ‘Do you now earn enough money to lead the kind of life you want, or not?’ “The Pew survey found that the youngest generation is surprisingly old-school in its life priorities,” Roos wrote; “Millennials chiefly want to be good parents, raise happy children and give back to society. How much money is ‘enough’ to meet those admirable, but not necessarily expensive goals? That amount will likely be different for everybody.”

The Millenials will earn less than their parents, according to the old economic model, but they are also the first generation in a long time to be engaged in creating a wholly new, substantially different world and, as a result, a newly ordered economy.  That explains why, according to Roos, “their elders are less hopeful for them. Fifty-four percent of Americans over the age of 55 thought young people today were unlikely to have a better life than their parents, compared with 42% of those ages 18 to 34.  Over the last two decades, people in their 50s and 60s have tended to be less upbeat about the chances of their children living as well as they do, according to data from the General Social Survey.”[6]  What the Millenials’ Baby Boom parents name pessimistically as loss is really just something they fundamentally cannot see.  They can’t see that the old, ‘Fordian’ economy has passed away.  They can’t see that, perhaps, such an economy is not the be-all and end-all of the world, itself, and they can’t see that something else, something creative, may very well be emerging out of the rubble heap of the old order.  They can’t see that that something new is, in fact, emerging.[7] 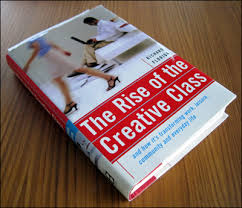 The world as we know it has shifted.  And I want to step out here and say, in fact, God is in this change.  The excitement embedded in the new ‘creative economy’, to borrow the compelling phrase from economist Richard Florida, and the ways in which social media is just the tip of the iceberg of these emergent voices is reason enough, for me, why their optimism holds real hope – real Christian hope – for our planet and society and, yes, for Christ’s church.  For the first time in a long time, there are adults who know how to cross-pollinate ideas, how to truly collaborate without fear of ownership or sabotage, how to interact and ‘friend’ others – regardless of whether they work for the same company, went to the same school or share the same politics – and how to find a greater, common good and enter freely into relationships with people of different backgrounds, races, religions, traditions, and sexual orientations.

You better believe this is going to change the church, the way the institution we created in modern memory and beefed up in very recent years operates and functions.  You better believe that this will feel, to many, like unsteady turbulence.  With those, we will be patient; for them, we will make space.  But you’d be wise to believe that God is also in this: that the Creator actually intends to reconcile it all, one with another; that Christ who lived and loved as one of us actually wants the vast human family at His expansive table; that the Spirit which has been moving in our midst for this long actually meant to light this fire.  It is hard, so very, very hard, to resurrect a worldview and, with it, to rebuild an economy.  But what’s so hard is also so good, so very, very good because it takes the holy risk of vulnerability – risking to share, risking to believe that God is in the future, just as He’s been in the past, risking to be set free from all that once weighed you down.

[2] Dave Roos, “Are Millenials Really the First Generation to do worse than their Parents?” http://money.howstuffworks.com/personal-finance/financial-planning/millennials-first-worse-parents1.htm

[4] Roos, “Are Millenials Really the First Generation to do worse than their Parents?”

[6] Roos, “Are Millenials Really the First Generation to do worse than their Parents?”

[7] Attributed to Richard Florida, The Rise of the Creative Class – Revisited (Basic Books, 2012)