Even before the title comes across the screen, you get the sense that the 2006 movie Little Miss Sunshine – if it is, in fact, a comedy – is going to be a pretty dark one.  You’re introduced to the Hoover family, one by one.  First, you meet seven or eight year old Olive Hoover in the living room of her Albuquerque home.  She’s watching Miss California win the Miss America contest, rewinding it and watching it again and again, mimicking the acceptance poses.  Olive, it strikes you, isn’t 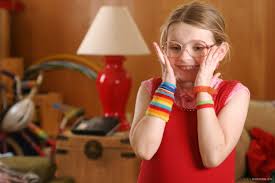 necessarily beauty pageant material, not that that’s a value in itself.  Then there’s Olive’s dad, Richard, a motivational speaker who’s peddling his nine-step life philosophy.  According to him, winners choose to be winners, and losers choose to be losers.  (Not such a great father, you fear.)  Your first glimpse of Olive’s mother is of her driving somewhere in some apparent haste.  She’s on the phone with Richard.  He asks if she’s smoking again; “No,” Sheryl says, tossing the cigarette out the window.  She’s on her way to the mental hospital to pick up her brother, Frank, a brilliant academic, who tried to take his own life following a bad breakup and loss of a research grant.  The 15-year-old Neitzsche-reading brother, Dwyane, has taken a vow of silence until he can enter the Air Force Academy, and Edwin, Olive’s grandfather, is also at home after being kicked out of a nursing home for some untoward activity.

Obviously, this is a collection of broken and dysfunctional people, to say the least, all of them except Olive – the one redeeming, honest, pure character in this whole story.  More than that, they’re all dealing with an incredible weight of stress, and most feel like they’re on the verge of breaking down; some already have.

The first scene is all of them in the Hoover home for dinner on the night Sheryl brings Frank home – all of these wounded folks shoved together with individually-tailored, dark clouds of anxiety and stress.  Dinner, for what it’s worth, is a bucket of chicken served on paper plates with popsicles for dessert, a meal obviously grabbed and served in haste to a collection of individuals being pulled apart at their own seams.  All except Olive, again, who at that dinner asks gentle and sweet questions.  All except Olive.

A few weekends ago, Olive entered a beauty pageant while visiting her aunt and cousins in California.  The Hoover’s got a call earlier that day, announcing that the winner was pulled out and Olive, as runner up, is eligible to compete in that weekend’s Little Miss Sunshine contest.  That’s just the spark to ignite the powder keg.  A screaming back-and-forth fight ensues between Richard and Sheryl – whether they can go and whether they can afford it and who would go and if they can use Richard’s seed money for his motivational book for this expense, a fight which makes any feeling that you have dysfunctional family gatherings palatable, at least.

Eventually, they decide they’re going.  With an elderly grandfather and suicidal brother-in-law who can’t be left alone, in fact, the entire family has to go.  All of these incredibly broken people cram into a VW Bus and make the 800 mile trip to southern California, thus kicking off a great road trip comedy.

Stress only builds and challenges mount throughout the trip.  From beginning to end, each character, Olive included, face serious difficulties.  Each character, for themself, has to chose by movie’s end whether they’re going to let the outside stressors and anxiety knock them out of whether they’re going to just quit playing that game.  In typical fashion, little Olive is the one who leads – culminating in the final, great scene: Olive’s talent offering at the Little Miss Sunshine competition, an exotic dance number her grandfather choreographed set to Rick James’ hit “Superfreak.”  When the pageant coordinators try to forcibly remove Olive from the stage, Richard jumps in and protects his daughter.  He starts dancing, in turn.  Frank, too, hops on stage and dances, joined by Dwyane who by this time has started speaking.  Laughing, Sheryl also joins her family on stage and, together, they dance and smile and, for the first time in the entire movie, seem to be sucking the nectar out of this thing called life, all of them dancing together.

It’s a moving, lasting image – dancing when the world has got these folks by the throat.  It’s true in our own lives, isn’t it?  In every one of our lives, when the air outside gets thick and oppressive, when relationships become fractured and the demands increase, we take that into our souls and selves, somehow, sometimes in ways we’re not fully aware of.  And we also, from time to time, take it out on others.  Too often we inflict on others the hurts and harms others have shoved on us, oftentimes in unthinking, reactive ways.  That’s just the nature of life.

But redemption, we know, isn’t achieved in the nature of this life.  No, redemption’s a different, an ironic choice to break the mores of this world and dare to be different, dare to risk new life in a world which feeds and feasts on finality and mortality.  To dance while the world won’t and dance, at that, to a song others don’t want to hear or simply cannot.  Dance, anyway, then.  Dance on.

The gospel author, John, records a wonderful story about an evening Jesus and his disciples enjoyed at the home of his close friends, Lazarus and Mary and Martha, siblings who shared a home in Bethany, a little town just outside Jerusalem.  This was “six days before the Passover”, the gospel tells us, and the reader is aware that by this time things in the ministry of Jesus have changed substantially, so much so, one suspects, something bad is going to happen on or near that very Passover, something imperiling the life of Jesus.  Days earlier, Jesus had raised his friend, Lazarus, from the dead.  That sign – the last and greatest sign John records – drove the Pharisees and chief priests into conclave with one another.  They said to themselves, “What are we to do?  This man is performing many signs.  If we let him go on like this, everyone will believe in him, and the Romans will come and destroy both our holy place and our nation.” (Jn.11:47-48)  The high priest, Caiaphas, arguing a shrewd and yet, you might say, perfectly normal political philosophy, instructed the Council that it would be better to have Jesus executed than to suffer that fate for the entire People of God.  The gospel tells us, then, that “from that day on they planned to put him to death.”(Jn. 11:53)  And that “Jesus therefore no longer walked about openly among the Jews” but hid away with his disciples (Jn. 11:54)

This is the situation while Jesus and his band of loyal followers dash off to Mary and Martha and Lazarus’ home for dinner.  The air outside was thick with death threats and fear, not to mention likely strategizing on the part of the twelve: how to get him out of there, how to save his life, how to save their own lives, how to cut a deal, whether this will turn fatal.  Talk about stress and anxiety.  Within that looming, palpable scene, there in that house, Mary takes a pound of incredibly expensive perfume, pours it over Jesus’ feet and rubs her hair in it, so much that the aroma of flowers and buds overpowers that small abode.  Let me add a visual:  this is a pint of amber-colored oil, a pint of an aromatic perfume, a pint of oil drawn from a flowering bush found only in Nepal or India or China, far, faraway from Bethany and wildly expensive.  And Mary just pours that all over Jesus’ feet, all over the floor, all throughout her hair.  Oh, did Mary ever dance that day.  While the others stand there, watching.

Not all characters in the story just stand there, though.  Indignant, Judas Iscariot argues against the obscenity of this scene, making, I’d say, a rather compelling point – they could’ve sold that oil for “three hundred denarii”, the pay an average Galilean would’ve earned if he worked for three hundred consecutive 12-hour workdays!  They could’ve done great good with that money.  They could’ve actually helped the poor, given bread and real care to the widows and orphans and all those marginalized by society, those whom Jesus reached out to save and redeem and love.

Jesus errs on the side of Mary’s extravagance, though, praising her wildly irrational, complete abandon.  “Leave her alone,” Jesus says.  Mary is celebrating, he indicates, enjoying the feast, dancing while the world was too busy getting stuck, stuck on itself.  Mary may be the only one doing the right thing, and yet it’s such a strange, unexpected thing.

It’s so easy, when life gets us by the throat, to turn inward, to fret and fear, to struggle and wrestle.  That is, I fear, the beginning of a deep and profound illness.  Of all the things remarked by and about Pope Francis, I was moved this week by his sense that there’s value in a church which strives to get out of itself, even if that means a church which will fail and fall and have “accidents,” as he put it.  In an interview while still Cardinal Bergoglio of Argentina, Francis said,

Like the church, we all struggle with what Francis calls a “spiritual disease” – turning too dangerously inward, becoming too self-referential, too closed off.  It’s understandable.  Of course it is, given the stress and anxiety with which we wrestle.  But if that’s our only turn, only inward, we’ll never reach out, let alone dance.  We’ll never strive towards redemption, never come close to joining that Lord of the dance, as the song goes.

I wish I could say that I’ve done this most of the time, but I can’t because I haven’t.  Like you, I know how hard this is, how taxing and counter-intuitive it is to go against the tit-for-tat trends of this world.  But I can also say that those times in which the circumstances of this life have come close to suffocating my spirit, those moments in which stress and anxiety have truly weighed me down, nearly to a breaking point, I, too, have become sick and self-referential; I, too, have turned inward and foisted my own struggles on to others.  And it is in those moments in which I have hurt myself the most, and in very significant ways.  I have also hurt others, I’m certain.

But life also gives the choice, again and again, in fact, day after day.  And it turns out that the choice whether to dance isn’t easy but, if you can set aside the difficulty, it’s just a little bit different and twisted and ironic and contrary to the way you and I are sometimes wired.  Turns out that we’re a whole lot better at dancing, maybe we could say we’re supposed to dance, and perhaps dance to a song this world doesn’t want to hear or simply cannot.  Dance through life, then, or strive to … especially when the stuff gets too heavy, too much, too daunting, the air too thick outside the thin walls of your soul.  Dance, then, towards Easter.  I’ll bet you’ll find your own new life, in turn.

One thought on “Dance, Dance wherever you may be”